A BRIEF HISTORY OF SANDHILL HOUSE

Sandhill House, now an enchanting countryside retreat with bed and breakfast and self-catering accommodation, was until about 200 years ago known as Sandock House. Good records exist of many of the occupiers of the site from the 13th Century to the present day. The first written record of a building on the site is in the Minister’s Accounts for 1298 when an Edwardus de Sandock was recorded as living here. The commanding and uninterrupted views over the Tamar Valley and to Dartmoor beyond together with its water supply from higher ground to the west made this site attractive to these early occupiers.

The current western range was formally one or more narrow farmhouses dating from the late 1500’s, although some of the out-buildings and stock sheds date from earlier times. Over the centuries additions and changes were made to the farm house including a dairy and bacon curing cold room on the north side and later, the grand Georgian wings with their spectacular views. Sandhill House is one of the oldest buildings in the area, and together with its stable blocks, coach house, walled garden, orchard barn and private chapel, was consequently included in the Nation’s List of Historic Structures by the Department of the Environment in 1968.

One notable recent occupant was the Rev. John Russell a wealthy parson who held no less than eight ‘livings’ in the vicinity. He lived at Sandhill in the late 1700’s until about 1810, spending a small fortune building the eastern Georgian wings, grand staircase and much fine period interior detailing. This ostentatious expansion of the house was no doubt done to reinforce his standing in the community; it included the conversion of a former 17th Century coach house in the stable yard into a private chapel.

A painting of John (Jack) Russell who bred the Jack Russell Terrier and whose father lived at Sandhill House at the turn of the 18th Century, along with the young ‘Jack Russell’.

The Rev. Russell’s son, also John (Jack) went to Oxford and also became a parson living in Devon. His love of hunting and countryside sports led to him developing the now famous breed of spirited little dogs known as Jack Russell Terriers.

The house was then sold to a Thomas Wallis prior to its occupation, in semi-retirement, of the legendary mining magnate John Williams, of the Williams Dynasty, whose family seat was and remains Scorrier House, near Redruth in west Cornwall.

John Williams was a member of one of the wealthiest mining dynasties in Cornwall. His forebear James Williams arrived in Cornwall from Shropshire at the turn of the 17th Century. He held a prominent position in society and married Mary Drake, daughter of the vicar of Gwennap. James and Mary’s grandson John Williams continued the successful enterprises and increased the family fortune. John Williams became one of Cornwall’s greatest mine agents, making even more money by leasing out mineral rights on their land holdings. He was also a great innovator of mining methods and technology.

John Williams the second’s nephew John Williams III, who was born in 1753, continued to expand the empire branching out into smelting and banking. At the height of his success he controlled over eighteen of the most productive mines in Cornwall producing copper, tin and latterly, arsenic, which was in great demand as an insecticide in the cotton fields of the southern States of America and in the glass making process.

In 1776 he married Catherine Harvey; they had five sons and four daughters. Two years later, in 1778, he bought and developed Scorrier House in the heart of west Cornwall’s mining area which, eight generations later, remains in the Williams family.

By the late 1770’s he was also taking an increasing interest in his east Cornwall mines and by 1800 his Gunnislake mines had further increased the family fortunes. Such was his influence in the area that for several years after 1816 the village was known as Williamstown. Early in the 19th Century he became owner and Lord of the 6000 acre Manor of Calstock.

By 1826, the year his wife Catherine died, then aged 73, John Williams had passed much of his empire to his sons and had retired to live at Sandhill House. In 1832 he caused a scandal in the family by marrying Mary Edwards, the young house keeper at Sandhill, who was 56 years his junior. They had a daughter born in 1832 who died when only four years old. 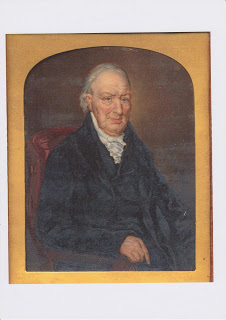 A portrait of John Williams in old age by Leakey believed to have been painted while he was living at Sandhill House.

John Williams died at Sandhill House on the 17th of April 1841 in his 89th year. His second wife Mary is recorded in the 1841 census as still living at Sandhill House with two female companions, all described as of ‘independent means’, together with five servants and a gardener who lived at Sandhill Lodge at the south end of the carriage drive.

Blessed with unbounded physical and intellectual energy and when in his late seventy’s and unable to tolerate retirement, John Williams, in association with his son Edward, built the Plymouth breakwater.

The 13th Century Calstock Church contains a memorial to John Williams, his four year old daughter and his second Wife. All three are buried in the churchyard.

Sandhill House, its private chapel, the walled garden, the coach house and stables were designated as Listed Buildings by the Department of the Environment in 1968.

The old Manor house has just undergone a sensitive refurbishment, is set in two acres of lavishly planted informal gardens which include a unique Southern Spanish Mediterranean water garden.  The magnificent 2 acre gardens overlooks eleven acres of parkland pasture and the Tamar Valley and Dartmoor beyond.

The small Listed stone barn, which used to be used to store the apples from the original orchard, has also been converted to a self-contained two person studio with a private, south facing garden and terrace. Guests may self-cater in the small but perfectly formed kitchen or take breakfast in the main house as a treat.