A quarter of a million German travellers visit Cornwall each year seeking out the world of writer, Rosamunde Pilcher. The Cornish born author wrote short stories and 28 romance novels. Many are set in Cornwall with over one hundred stories being turned into TV series which attract 7 million viewers in Germany, where Pilcher has become a household name.

Born in Lelant, Pilcher spent much of her early life exploring the coves and beaches around her local area. These memories fill the pages of her books.

Like Daphne Du Maurier and Winston Graham, Rosamunde Pilcher’s name has become part Cornwall’s culture and German fans, flock to find the wild and iconic sights they recognise from her books and TV series.

It wasn’t until some time after we moved to Sandhill House that we found out a film, based on Rosamunde Pilcher’s writing, was film here.  I could not work out why, in our beautiful flower filled gardens, I kept finding grizzly artificial flowers. It turns out that Flugel der Liebe was partially filmed at the house and in the neighbouring chapel. They filmed at a time when there were no flowers hence, they used  artificial ones all over the garden.

After some internet detective work, finally, it was this photo of the owl that lead me to the actual film. There was no doubt about it, that was our view! 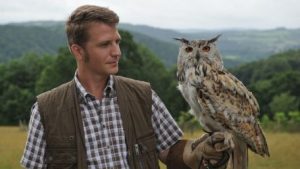 That is our view!

It is very strange to see someone coming up and knocking on our front door, a couple sitting at the end of our formal ponds having tea and  our beautiful views and gardens. 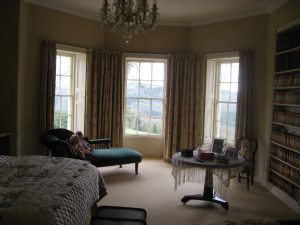 This is what the bedroom used in the film looked like, but you can now come and stay with us to find out what it looks like now, after its recent make-over.